skip to main | skip to sidebar

That thing we can't admit.

The links off Dw3t-Hthr's recent post have gotten me to thinking again. I'm not going to go into the heart of the fiasco, because I'm only a bystander and the injured party doesn't want more shit stirred for her sake, but, you know, thoughts.

Why is it that racism is the one sin we can't seem to admit to? Okay, so it's not just racism, it's prejudices in general, because they're all connected, but it really seems to come up an awful lot when women of color take white feminists to task for being racist.

How hard is it to say, "Sorry, I see that what I did there marginalized you and appropriated your work in a way that was racist of me, and I'll work to fix that behavior now"?

We live in a racist (among other ugly things) society. Those of us who grow up under the invisible banner of privilege are going to have racist thoughts, are going to do racist things. Me? I am a little middle-class white girl whose understanding of the issues of people of color is largely limited to anime (I mean, seriously), the television of David Simon (a white man, I might add), and blogs. I'm going to think and say and do racist shit sometimes, and then I'm going to have to apologize for it and make sure I don't do it in the future. Them's the breaks. It's how we learn.

Denying it when it's this obvious only adds "being a self-involved ass" to the list of bad behaviors you're displaying.
Posted by Tziyonah at 1:50 PM 46 comments:

"Using data on political groups in Bangladesh, for example, [Steve] Shellman's team [at the University of Georgia in Athens, US] has shown that repressive government policies, such as violent clampdowns on political groups, have side effects. When many political groups were repressed at once, formerly peaceful groups turned violent. So, while repression might seem attractive to governments, the model shows it often backfires."

I suppose now at least we can at least say that it is scientifically proven that oppression is a Bad Thing.
Posted by Tziyonah at 8:41 PM 1 comment:

late to the party, but what the hell

"The fact is that all prostitution, including Spitzer’s brokering of a high-priced call-girl, is dangerous for several reasons: first, as a population, prostitutes suffer grave victimization and physical harm; second, prostitution degrades the status of all women by affirming the pathology of associating sex with property; finally, prostitution undermines perhaps the most important moment of reckoning in our country’s history – when we established legally that human beings cannot be bought and sold."

Does anybody see what's wrong with this statement?

I mean, okay, besides the various false assumptions in the first two reasons listed. The idea that the reasons many prostitutes suffer grave victimization and physical harm all stem from some inherent flaw in sex work itself, rather than the culture of bigotry and shame that surrounds it, is an assumption with only philosophical ramblings to back it up. The second reason listed is even more pernicious--the idea that what one woman does can somehow degrade all women has been used to legitimize sexism for ages. But the third one? The idea that selling sexual services makes you a slave?

Can we count the ways in which that's fucked up?

There's the idea that the only sex workers who "count" are those who are forced into it and essentially treated as slaves. You're only allowed to be in the picture if you fit a (supposedly) more privileged writer/thinker's view of your profession. If you're doing it because it's better than flipping burgers, or, heaven forbid, because you actually like it, you don't exist.

Well, that's just stupid. But somehow, I don't think that's what the writer is getting at. I think what he/she is saying is far nastier.

I think it rests on this: the assumption that one's sex, alone among physical services, represents one's entire humanity. How else would getting paid for performing sexual services be seen as equivalent to having other people exchange money to use your entire life as they see fit?

And this idea that a woman (or anyone who puts themselves into the feminine role of whore) can be defined entirely by sex is at the heart of the oppression and misogyny that makes the world worse for everyone, especially all women.
Posted by Tziyonah at 3:27 PM 1 comment:

Why is it that so many "compliments" to a woman's appearance revolve around her unsuitability for the workplace?

All right, that's a bit of a rhetorical question. I could provide some answers easily enough. Because women are supposed to be passive objects, not active workers. Because sexism requires compliments to women to always have a bit of a sting in their tail (keep them down even when you're being nice). I could go on, really.

The usual is this one: "A pretty girl like you shouldn't be doing a tough job like this!"

But the other day, I got a different one. I got: "How can anyone work with such a pretty girl? She's too distracting!" And, when he thought I couldn't hear: "That girl's so hot, I wouldn't be able to work with her."

(This was particularly charming as, on the day in question, I was rather under the weather with a cold and actually looking rather sunken-eyed and wan. Buuuut, on account of warm weather, I was wearing a low-cut shirt. So I had a bit of a guarantee there that what made me so hot wasn't even my face--it was my T&A.)

So that's yet another angle to come at it from--not only must we compliment working women by reminding them of their inherent unsuitability for the workplace, but we can additionally remind them that their mere existence makes things difficult for the poor menfolk!

I wonder how many more angles this particular delightful shape has?
Posted by Tziyonah at 11:46 PM 2 comments:

Assumptions make you and me very confused.

So I was at work when a sales rep who was helping us out with the holiday rush invited me to the following party: 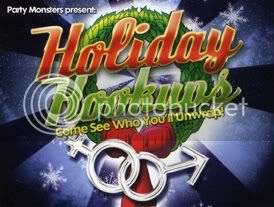 ...yeah. A Christmas party, labeled "Holiday Hookups," with interlocking Mars/Venus symbols below it.

I stare at it blankly for a few moments, then go after the rep. I tap meaningfully at the symbols: "This isn't my kind of party." He looks at me. Tap, tap, tap. Finally he says, "Oh, you don't have to hook up with anybody if you don't want."

Whoosh. No, I'm not part of your group.

I look at the back of the card. The party starts at 11 pm and goes to "???", it says. "Donations in advance" are $30 for guys and $10 for girls (and, I have no doubt, if this was questioned, someone would talk about how much easier and more advantageous it makes things for girls). It's in one of the biggest and most dangerous cities in the state.

But hey, it's got an open bar all night! What could possibly go wrong?

Me, I think I'll be playing City of Heroes or Super Mario Galaxy instead. I'm sure there's a happy medium between the two options somewhere, but for now, this helps me feel more secure about my extreme...
Posted by Tziyonah at 8:23 PM 1 comment:

Until the seventeenth century (at least according to my dictionary), victim simply meant "an animal offered as a sacrifice." I would note that this is suspiciously similar to the literal definition of scapegoat. And we all know what a scapegoat is.

This is something that's been brewing in me at least since I responded to this thread on Livejournal. But it's probably been there a while longer, really.

Blame-the-victim mentality is so deeply entrenched in society we almost don't realize how far it stretches. We may encounter it in a case of rape and decry it there; we may see it buried in homophobia and try to strike back at it there; we may slap it down when it comes up regarding bullying. But we don't often sit back and realize that all those different manifestations spring from that one tendency.

"I don't mind gay people, but if they're going to flaunt themselves like that, they should be prepared for the consequences."

"A kid committed suicide because he was being called names at school? What a little pussy."

"You've got to ask yourself, what was a pretty girl like her doing there at that hour anyway?"

"If that town's really so racist, the black people should just move out."

"If he was really doing all that to his daughter, why didn't the kid speak up sooner?"

It's pernicious. It's everywhere. And I think I understand why: our society, in its current dysfunctional form, needs to blame the victim.

The bullies, the abusive addicts, the rapists, the gay-bashers, the racists, the child abusers (that is, the majority of child abusers who are actually otherwise respectable family members): they are a part of society. They are woven into its fabric, institutionalized, with their names engraved in little plaques on a walkway. "Mr. & Mrs. We Hate Gay People and their little boy Nerdpuncher contributed. They belong."

Bad things happen in this society, though. The people interested in preserving it will deny this when possible, but sometimes it's not possible. And that's when they need a class of people to blame it on.

And here come the victims--of course they are people but it's much easier to simply call them victims, sacrifices for the state religion. The victims are so convenient, in some ways. They're already admitting that there's a problem, which is something most people would rather not--how big a step is it to tell them to take responsibility for that problem? Besides, they've proven, by virtue of being a victim, that they are weaker than the members of society who beat them down.

Of course, it's society that has failed these people. But Society Can't Fail. So they must have failed society; they must not belong. They must be victims--

--and with that label, they are removed from society. The sins of the community are placed on them, and they are released into the wilderness. And unlike the abusers, who are a part of society, they become acceptable targets for blame.

Our society needs to blame the victim, because otherwise, it would have to turn that scathing eye inwards. And then it might have to change.
Posted by Tziyonah at 3:21 PM No comments:

It's been too long, but finally, while going over a friend's old battle over self-definition--

(Tangential: you cannot disagree with self-definition. You can think it silly, you can fail to understand it, you can find it alien, but you can't disagree. It doesn't involve you; it says so in the word itself, for crying out loud.)

--I finally understand the itch that lodged behind my skull when, years ago when I first realized my sexuality, I read about a woman who called herself lesbian for political reasons.

I know now that that's called a "lesbian separatist." At the time, it simply seemed wrong. I couldn't quite articulate why--I could mumble about how politics don't come into it, about how it doesn't work that way, but I couldn't put a word to it.

Now I can. It's called appropriation.

Finding Religion in All the Wrong Places

Words for the journey of one lapsed-Jewish lesbian fangirl from New Jersey trying to figure out how to be an adult.

Tziyonah
"...everybody has a secret world inside of them. I mean everybody. All of the people in the whole world--no matter how dull and boring they are on the outside. Inside they've all got unimaginable, magnificent, wonderful, stupid, amazing worlds...not just one world. Hundreds of them. Thousands, maybe."